Delinquency by Gender, Race, and Education

This is the second in a series of posts covering a report by the Federal Reserve on racial, gender, and educational differences in household debt reporting. In last week’s post, we looked at Household Debt Inequality by Race, Gender, and Education. Today we focus on economic inequalities with regard to delinquency. We start, as we did with the first post in the series, by looking at the unique methodology the Fed used in developing their data.

There is plenty of information about the volume of household debt in the aggregate. But when it comes to looking at household debt for narrower demographic segments of the population, we have little to no reliable data. So, the research team at Liberty Street had to get creative.

To develop the data used in this series, they “linked anonymized educational and demographic data of first time freshman students enrolled at the City University of New York (CUNY is the largest urban college system in the country) with the students’ anonymized household debt data from the New York Fed/Equifax Consumer Credit panel. This unique data set allows analysis of debt by race and gender of CUNY students born between 1942 and 1988.”

Finally, all data is based on debt accrued by age 30 for all the measured groups

As we wrote last week, women and Black students were more likely to take out student loans, and in higher amounts, than men and white students. Asian and Hispanic students (with the exception of Hispanic BA students) tended to take on less student loan debt. As we look at the chart below, we find that female AA and BA students were less likely ever to be delinquent on their student loans compared to male students. Specifically, female AA students were 3.1 percentage points less likely than their male AA counterparts to be delinquent. This gap narrows to 1.5 percentage points for BA students. When we look at race, the numbers become more dramatic when comparing both Black and Hispanic students to white students:

What we see is that higher propensities to borrow, along with higher balances, tend to correlate with the likelihood of becoming delinquent. The notable exception to this is for all female students who are more likely to borrow and borrow more than males, but yet are less likely to be delinquent on their payments. As we showed last week, women and all racial minorities tend to have lower credit card balances than white males at age 30. With regard to credit card delinquency, female AA and BA students were 3 percentage points and 1 percentage points, respectively, more likely to be delinquent than their male counterparts at each level of educational attainment. The gap for BA students is not statistically significant. As we saw with student debt above, the delinquency gap for credit card debt is also significant when we look at race. Specifically: 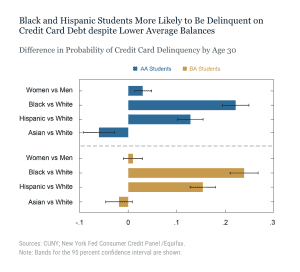 As we look at the auto loan chart below, we see that delinquency rates for women and Asians are not statistically different than men and Whites, respectively. Turning to racial differences: In this post, we see that Black and Hispanic students had a higher likelihood of delinquency, despite their lower rate of debt origination. The writers suggest that this phenomenon might be partially explained by the fact that Black and Hispanic students take on a much higher level of student debt, which could ultimately strain their ability to meet other types of household debt. But another factor might be labor force participation based on educational outcomes. We’ll cover this theory in the next, and final, post in this series.