This is the third and final post in our series examining the Federal Reserve’s recent study on gender and racial differences in measuring household debt. If you haven’t read the first two posts, here are the links:

As you would see if you read these first two posts, the Fed had to create a unique model for estimating both debt and delinquency outcomes. For convenience, we’ve provided the explanation for their model below.

There is plenty of information about the volume of household debt in the aggregate. But when it comes to looking at household debt for narrower demographic segments of the population, we have little to no reliable data. So, the research team at Liberty Street had to get creative.

To develop the data used in this series, they “linked anonymized educational and demographic data of first-time freshman students enrolled at the City University of New York (CUNY is the largest urban college system in the country) with the students’ anonymized household debt data from the New York Fed/Equifax Consumer Credit Panel. This unique data set allows analysis of debt by race and gender of CUNY students born between 1942 and 1988.”

Finally, all data is based on debt accrued by age 30 for all the measured groups

Here is a summary of the findings from the first two parts of the Fed’s debt and delinquency series:

In trying to understand some of the debt and delinquency differences outlined above, the Fed theorizes that gender and racial disparities in labor market outcomes might be a reasonable explanation. However, they do not have data on labor market outcomes for the CUNY samples discussed in the methodology section above. So, they made another adjustment to the data, as outlined below:

“We consider education outcomes as a proxy for labor market outcomes drawing on the overwhelming evidence in favor of a strong linkage between education and labor market outcomes. In this post, we leverage administrative data on demographic and educational outcomes from an anonymized data set of all first-time freshman students enrolled with CUNY between 1999 and 2014.”

The charts below, as with the two previous posts, are broken out by those seeking associate degrees (AA) or bachelor’s degrees (BA). But with regard to using education as a proxy, the study looks at two educational outcomes by gender and race:

In the Fed’s CUNY sample, 25 percent of AA and 52 percent of BA students attained their intended degrees by age 30. These rates are consistent with what we would see from a national sample. In looking at the chart below, we see the following: Considering educational attainment as a proxy for labor force outcomes, we can see that the significant gaps in graduation rates are likely to translate to similar gaps in both employment and earnings. As such, we have a reasonable explanation for the racial disparities in both repayment and delinquencies.

The second proxy in the Fed’s methodology for estimating labor market outcomes was grades. Specifically, the chart below looks at the cumulative grade point average (GPA) attained by the fourth semester for AA students and eight semesters for BA students. As we see in looking at the chart: 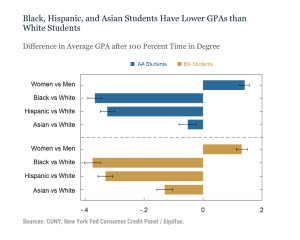 By looking at the Fed’s use of educational attainment as a proxy for labor market outcomes, we begin to get clarity on what the first two posts in this series showed us. Notably, the gaps in educational outcomes between white students and their Black and Hispanic peers, suggest disparities in both employment and earnings between these groups. As such, we can identify important factors leading  to racial gaps in both delinquency homeownership