Since the start of the pandemic, the RDS Business Intelligence team has been tracking trends in the U.S. labor market through our Tableau Public page. You can find 18 interactive unemployment workbooks by visiting our RDS TABLEAU PUBLIC page.

We’ve also been tracking the rate of unemployment by various demographic groups and labor sectors. The chart below looks at the current unemployment rate by group, comparing it to the rate a year ago, and also to April, 2020 which was the unemployment high point of the pandemic. Earlier this year, we wrote a blog on A Deep Dive Into the Great Resignation. The post looked at how millions of Americans have walked away from their jobs just as the economy was beginning to recover from the Covid-19 economy. Perhaps cushioned by government stimulus checks and extended unemployment support, many Americans used their downtime to reassess the meaning of work in their lives. As we wrote at the time, this attitude shift created a “buyer’s market” for workers who are searching for better pay, greater security, and more flexibility in their work lives.

Today we take an updated look at job openings and turnover in the labor market.

As you can see in the screenshot below, 6.9% of non-farm jobs remain open as of the most recent report from the Bureau of Labor Statistics. This is essentially the same level we saw back in March when we wrote the Great Resignation post. 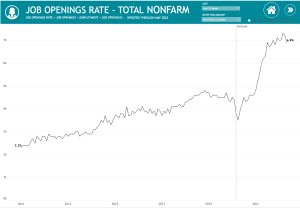 For reference, a job is considered “open” if it meets all three of the following variables:

Perhaps the most telling statistic to put context around the Great Resignation is the relationship between hires and separations. Let’s define each:

Below is a screenshot of the current Hires vs. Separations Tableau workbook. Here’s what we see:

Finally, we look at the gap between current job openings and unemployed persons, both from a raw data perspective as well as the percentage difference between the two measures. See the screenshots below: CLICK HERE to go to the Job Openings and Labor Turnover page on Tableau Public.